In a recent article praising the performance of the Indian Under-19 team in the recently concluded World Cup, Ian Chappell made a statement which goes as follows: “spinner Harmeet Singh ….. that would right now place him as the best spin bowler in any Test side bar England”. The indirect implication of this statement is that Graeme Swann is the presently the best spinner in the world.

The claim is certainly intriguing, indirect however it may be, coming from an eminent ex-Cricketer of the stature of Ian Chappell. Let us verify whether Mr. Chappell’s claim is true or not. Although he wrote this article in the context of ODIs, my guess is that he was referring to Swann as the best spinner in both the Tests as well as the ODIs.

To refute Mr. Chappell’s claim, albeit in a more direct fashion, I will provide just two figures, both of which are quite self-explanatory. 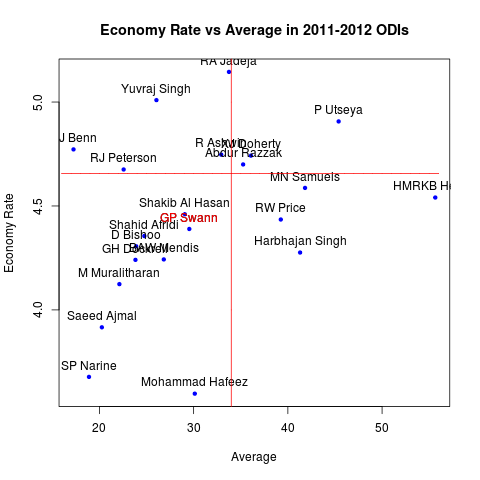 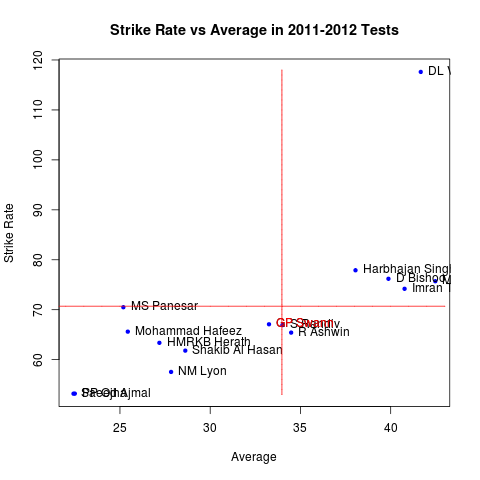 In each figure, we show only those spinners with a minimum of 15 wickets in years 2011 and 2012. The red lines correspond to the overall average statistics for the spinners in this period. In both the cases, there are quite a few spinners who are better in both economy and average (in the case of ODIs), or strike rate and average (in the case of Tests). In particular, Saeed Ajmal not only dominates Swann in both the formats of the game, he also has more wickets than Swann. This can also be clearly seen using the player comparison tool for Ajmal and Swann in ODI and Test formats.

So perhaps Mr. Swann is indeed the best spinner today, but only in the fantasy world of Mr. Chappell. In the real world, Swann is certainly a good spinner, but there are also much better spinners than him in both the formats of the game.